A Labor Day Cause
It was Labor Day and I had the opportunity to go for a nice midmorning run. The air was starting to heat like a pan that had just been placed on a stove, but it was still mild enough to enjoy. The sun hadn’t climbed to it’s perch so the exceptionally warm day was still cooler than my noonday runs.

As I ran down the road I noticed a man walking along the sidewalk. He was an older gentleman, probably in his mid-sixties, and he wore a white ball cap as If he had just habitually said, “there’s sun; I need to cover my head”. This was even more evident with the clash of his jeans and long-sleeved, plaid, button down shirt.

As he walked he carried a white sign, probably three feet tall and two feet wide, with two small american flags popping out of the top like the antenna on an old TV. On the side in a big red circle, it simply said “Support Planned Parenthood.”

An Odd Exchange
As I ran up to the man, trying to read the fine print on his sign while I passing him by, a slightly younger gentleman walked up to him. He wore simple khaki shorts, a royal blue t-shirt, and a smile from ear to ear.

As I made it to the spot where they were standing, I heard the simply-dressed man say, “God bless you!” with a strength of sincerity that radiated through his smile. I can’t say if it was this action or the fact that the first man had been facing the other way, but the older man seemed genuinely startled. I think that as much as anything accounted for his defensive response.

“I said ‘God bless you.’ I pray that God rains down blessings on you.”

At this point I stopped just a few feet past where they were. It was obvious the man with the sign wasn’t sure why the younger gentleman was saying this. It seemed like he was expecting something else. Perhaps they knew each other in some way. I don’t know. I just know there was a silence that seemed to last forever. Then finally the man with the sign spoke, hesitantly, like he had been mulling it over for a few moments, but wasn’t sure if he should say it.

“What if I told you I don’t believe in your God?”

Our Statue of God Is Watching You
It was an odd statement. I think he felt it too. I think most people in his shoes would have just said “thank you” or “God bless you too” Perhaps he was testing the man. Perhaps he just wanted to get the man to leave. Perhaps he’s used to the tension between Planned Parenthood and the church so prevalent in this town. 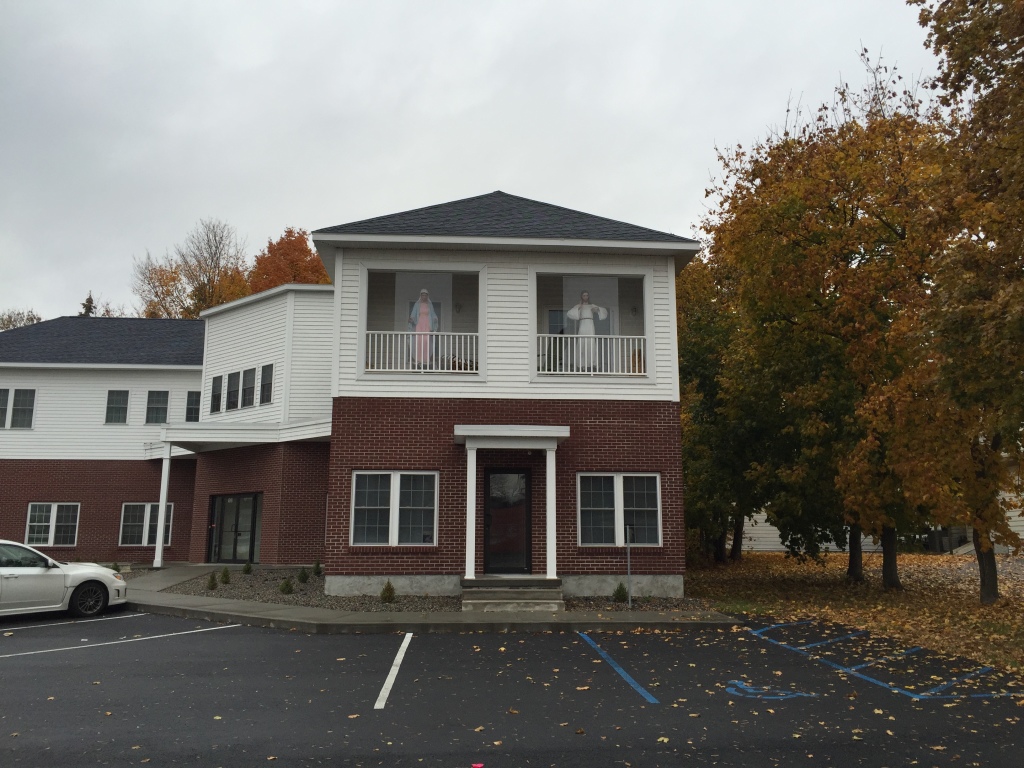 Then someone funded a building across the street. I’m not sure of the purpose of this building. However, based on the decor, it was most likely built by people that disapproved of the Planned Parenthood across the street. On the top floor of the building on the side facing the Planned Parenthood, they erected a statue of Jesus and Mary. There seems to be a particular message they are trying to convey, and it only makes the tension between the two groups stronger.

A Soft Answer
Evidently the man in the royal blue shirt didn’t get the memo. There was no anger, no hostility, no tension. He just sat with a smile while the words “I don’t believe in your God” hung in the air. It didn’t phase him. It didn’t make him recoil or react. It simply made him respond.

“That’s okay. He believes in you.”

The older man sat startled. He had prepped for a fight and no one showed up. The man in the royal blue shirt continued.

The older man was confused, but he caught on. This guy wasn’t his enemy. He was his ally. He was thrown off with the “God bless you” out of the gate. Sure, he had a lot of church going friends, a few who even supported his cause, but in that instant, “God bless you” seemed provocative.

“I am. I know that might put us at odds, and I know that means we both disagree about something very important to both of us, but that doesn’t mean I don’t care about you and admire your courage and selflessness.”

Making the World Better
Sadly this story was only true to the point I saw the man with the sign. I wish it weren’t. Life goes on and the tension builds between the two groups. It seems everyone is angry and no one changes anyone’s mind.

I don’t quite understand why we can’t be nice to people we disagree with. I don’t quite understand why we can’t respect people and love people even if we disagree with their views. I think the most perplexing of all is that the lack of kindness, respect, and love isn’t doing any good; it’s only making things worse. Aren’t we doing the same thing over and over and expecting different results? Maybe there is a better way.

Maybe it’s time to care more about people and less about being right. That’s not to say we give up our values; it just means we take our time to care about people first. People don’t care a hill of beans about what we believe and why, if we don’t care about them. However, when you show kindness, respect, and understanding, people can’t stop asking what it is that makes you smile. As the saying goes, “a soft answer turns away wrath, but a harsh word stirs up anger.” Maybe it’s time to focus more on the value of people than the value of our argument.