I Flew with God’s Favorite Person 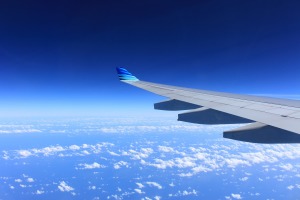 God’s Favorite Person Is a Seat Hog
I have a lot of fun traveling, and I travel quite a bit. Typically I’m flying somewhere every month and often a couple times a month. It’s allowed me to see a lot of the world. It’s also allowed me to bump into a lot of interesting people from all walks of life. Yet it was on my most recent trip that I bumped into someone that was unique.

You wouldn’t know it by talking with him. I spoke with him for just a few minutes as we boarded. The conversation was cordial but stiff and quite short. There was nothing in his tone or demeanor that really stood out.

And you wouldn’t know it by looking at him. He looked average. He had short brown hair and nothing that distinguished him. He was quite casually dressed. As best I can recall he was wearing an old pair of jeans and a dark gray t-shirt. The shirt was fairly loose and it covered his fairly large frame.

You also wouldn’t know it by interacting with him. For the majority of the flight he propped his head up against the window and slept while his ample frame invaded what little bit of seat the airline gave me. I tried to be a kind and considerate human being, but he was crowding an already crowded space for the entirety of my flight.

Everything I did was a struggle. Opening a bag of peanuts required a forward leaning, elbows-in maneuver. Pulling something out of my pocket required imitating an ironing board on its side. My desire to be a considerate person in this social context was growing thin and my desire to explain in great and boisterous detail my discomfort was simmering inside of me turning into a rolling boil. That’s when I had a startling realization about who he was.

God’s Favorite Gets on My Nerves
I had that same realization one morning not long after at 6:00 am. My internet connection was down and had been for 10 hours. I work from home, so if my internet connection is down I often can’t work. At 6:00 am I realized there was no internet and so I called my cable company. As my eyes were nearly weighted shut and my head would not stay aloft, I went through prompt after prompt trying just to talk to someone.

Like some electronic gauntlet, I finally arrived through all the pushbutton challenges to speak to a live person. I told them what the problem was and that it was imperative that I have internet access to work. After airing my concerns and sharing what I needed, I felt better, until the person said they couldn’t help me. That’s when they transferred me and I had to do it all again, and that’s when I had the realization.

My Favorite is the One that Does that Thing with the Stuff
To be fair, that realization was born on the back of something my boys had discovered long ago. I have three boys that are all very different. One is secure in our relationship and enjoys spending time with me. One is probably secure in our relationship, but would rather spend time with his friends because spending time with grown ups – meh. Finally, my youngest is extremely jealous of my time and demands almost constant attention from me every waking moment. In fact, he will make sure those waking moments start as soon as possible.

Yet throughout their early life they used to ask me about my favorite – who I loved more. Over the years I have made it abundantly clear to them exactly who was my favorite. Quite often I would ask them who my favorite was and make them tell me. It was just part of what our family did. We did it so often, we barely talk about it any more. Everyone just knows.

Not only do I not have the desire to have a favorite, I couldn’t pick one. One of them is so kind and considerate, and we have a great time when we are together. He’s low maintenance. It’s great. Another is very social and he looks at the world as a big playground. He’s very technical and shows me so many cool things, and when I try to impart wisdom to him he just sits and listens. And my youngest is high maintenance and requires a lot of nurturing, but he is so curious and helps me grow in so many ways. To have only one favorite relationship would be to miss out on the joys and growth and experiences of the others. Why limit myself?

Thank God He’s the Same Way
It wasn’t long after my most recent trip that I realized the truth about God. We are all his favorite. He loves us all and wants the best for all of us. All of us.

That guy crowding us on the plane, that annoying customer service rep who didn’t really hear what we needed and just transferred us to get rid of us, that salesperson that refuses to accept a return even though the product is obviously defective, even that person that crushed you in high school – they are all God’s favorite. And that means we have to treat them as we would treat the person in the world that is the most important to God. Every. Single. One.

If you have difficult people in your life, it is best to limit your interaction with them. But sometimes you have to spend time with people that are rude, inconsiderate, thoughtless, careless, or downright mean. It doesn’t mean you have to accept that treatment or even stay around if you are treated that way, but sometimes you still have to have some interaction with these people.

I have one such person in my life. And every day, I pray that I will treat them like they are God’s favorite. It doesn’t mean that they can walk all over me or that they are allowed to do hurtful things, but it does mean that even if they do, I have to love them and treat them with kindness. After all, if we ask “What would Jesus Do?” it makes a world of difference when we remember that that person is actually his favorite.