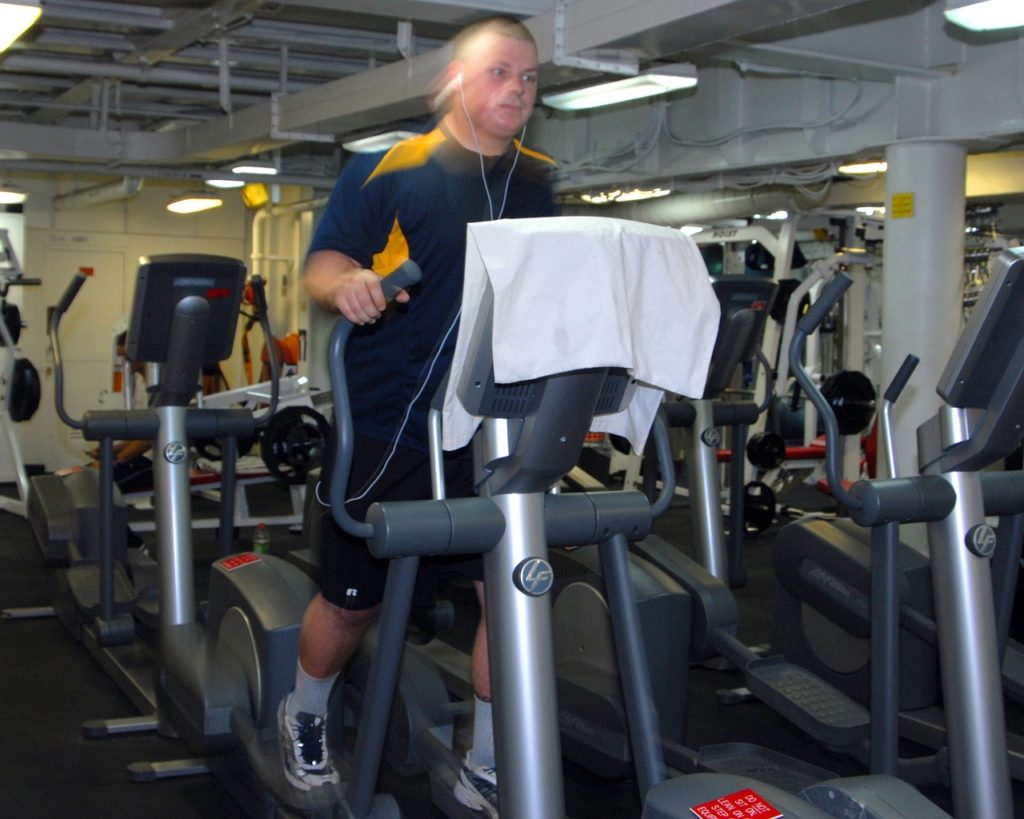 My treadmill does something so frustrating I sometimes find myself yelling at it. As I’m exercising, the speakers scream at me in some crazy, electronic caterwaul. And yet my yelling only serves to teach me another life lesson. Again. Ugh.

My Treadmill Is so Dumb…
My treadmill is so dumb, it isn’t even a treadmill (and definitely not the best treadmill). It’s an elliptical. Which means it’s better for my knees but has a crazy name. Why they couldn’t pick an awesome name like “blade runner” is beyond me.

But despite the ludicrous name, it’s the bizarre, alien screeching that angers me. I have my phone in a little pocket of the elliptical. I hook it up so that halfway through my exercise I can listen to an audiobook.

Unfortunately, that makes it easy for the phone to throw all kinds of wild alien-borne signals through the air that evidently angers the dumb thing. As I sit there working out, I often hear this weird staccato buzzing and beeping, like some deep-space morse code. It seems to occur when I’m about to get a call or a voicemail or a text message. Or sometimes when I’m simply breathing – you know – for fun.

A Bird From the Future
It’s like some robotic bird from the future, just sitting on the dashboard of this machine with a tiny speaker in it’s beak that just buzzes out tweets and chirps. It’s annoying.

And what makes it worse is the poor craftsmanship. It’s quite obvious that when someone built this thing they didn’t take the time to put shielding around the right components so that it didn’t pick up these errant signals. What’s more, I’m sure in testing and in customer feedback they learned that this was going on and yet they let it continue.

It frustrates me to think that the company that put this together could so eschew customer service that they would not fix this. Bear in mind, I say “the company” because I’m not the type to out a company that built a fantastic machine, but with a little flaw. Let’s just say their name rhymes with “mole”.

It’s Just Built That Way
Yet as I sit here frustrated at the lack of customer-focused design, and angry that this blessed thing keeps chirping at me, I realize that regardless of whether or not it was designed well, it’s still the way it was built. My yelling and sighs of frustration won’t change that. It won’t alter it’s makeup.

And to be honest, it’s not that big of a deal, but for some reason the fact that this little flaw exists is enough to make me bark at it on occasion. At least I don’t go too far with it… you know, like writing a post about it or something. (slight whistling while looking the other way).

See: I Told You There Was a Lesson
Yet, how many times do we do the same things to people. We yell at people for being inconsiderate or thoughtless, and yet that’s the way they were built – without role models to help them understand. For all their chirping and buzzing, we get frustrated, we get angry, and we solve nothing.

What’s more, it often turns out that it’s not that big of a deal – it’s just something that frustrates us because we don’t want to deal with it; it alters our perfect plan of the way things should be.

But unlike the elliptical which can’t feel the weight of my disdain, the people we growl at and throw shade toward can feel every last angry breath. And deep down they feel nothing but sorrow when being judged for being built the way they are built.

Nothing will change the noise we hear, so we might as well just accept it and find out what we can do to make it better. After all, it’s just a little buzzing. Why throw our own caterwauling on top of it?