The Game I Won’t Soon Forget 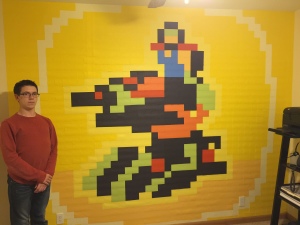 Joseph posing with art of a character from the game

Quality Time A Thousand Miles Apart
“I’m dead again! Dang it! This is brutal!” After the fourth time, I stopped keeping count, but there was something beautiful about it.

I was playing an online game with my oldest son, Joseph, and my girlfriend, Cristi. Although we see each other often, we all live in separate locations and find time to spend together playing online games. It’s one of the things we really enjoy doing.

In fact we’ve become so good, most games are a walk through. The 5 player vs. 5 player matches typically only take us about 10 minutes to win.

But that night was different. We decided since we were playing so well, to bump it up a level. We’ve done it many times before, so it didn’t seem like it was that big of a deal. We were wrong.

For the Record, I’m Normally Amazing
The game developers had just made a patch and changed a bunch of things. Right out of the gate, I was dead in seconds. It was not going well.

Joseph and Cristi weren’t faring any better. It was almost a constant cycle of us dying and waiting to come back and play some more. And the new characters they introduced weren’t helping.

“Whoa! Two hits and I’m almost dead! She’s way overpowered!” This game had all the elements of a horror film, and we were the naive campers in the first act.

From Bad to Worse
It didn’t get better. The chatter over Skype was immensely negative. “We are going to lose.” “They are too strong.” “I hate this.” It was like being bathed in worthlessness.

And we were losing. The way this particular game is played, you have to score 40 points on your enemy’s base before they score 40 on yours. It was 19 to 0. We were, as they say, being owned.

It’s All About Inertia
But then we started to change. We decided that we were going to focus on what we could do and where we could win. We stopped with all the negative talk and started talking about our abilities. “We’ve done it before, we can do it again!”

We changed our strategies. We grouped better. We better protected the areas that were important. And it showed. Things started to change. In the time the enemy team moved 4 more points to 23, we tied them. It was now neck and neck.

The bad start gave us negative momentum. Our negative conversation only added to that momentum. By putting on the brakes and changing our tune, we had started to change our inertia.

Regardless of the Outcome, It Was a Great Comeback
We pressed on, bolstered by the fact that we tied it up. The team was still extremely tough, but we were at least going to give them all we had. We kept pressing. We were gaining, but they were matching us. 27 to 27, then 31 to 31. Then both teams were within just a handful of points of a win.

We were in the final stretch. There were two towers that, between them would gather enough points to clinch the match. We fought hard, but they took the first tower, which brought them to 39, one point from victory. We had to get the last tower. If we did, we would win. If not, we would lose.

We played hard and tough, and just when we thought we might win, we heard that familiar sound “ding”, “ding”, “ding”. I had died, as had two other people. I dropped my head in defeat.

It was a good game. We had come so close. In the end, I was proud that we turned it around and gave it our all. It was a defeat worth accepting. Not that you could tell from the growl of frustration I uttered when I died.

Then Joseph said “we got it!” I looked, and there in front of me was the tower, firing on their base… 6 shots, giving us the victory. Even with only 2 of our players to their 5, our team had pulled out a victory: 39 to 40 – as close as they come.

What Will You Remember?
It’s a great story. It’s fun to tell. I can recount how I felt including my frustration and overwhelming disbelief at our win. It will stick with me for a long time.

Which will make it stand out from the many other times I’ve played. As this is a way I get to spend time with both Joseph and Cristi when we aren’t together, it’s our way to talk and have fun together. It’s the virtual version of sitting around the table playing board games.

Yet of all the games we played, this one will stand out, which really makes me think: we had the option to play at a level that was not as hard, but we didn’t. Now we have a story to tell. If we had played the easier level, there would most likely be no story. This blog post wouldn’t exist. The time we spent would have faded into history.

Sometimes it’s hard to challenge ourselves. Sometimes it’s easy to keep doing things the way we’ve always done them. But 10 years from now, if we always do the easy things, where will the stories be?

Challenge yourself! Make memories! Create Stories! And when you do, remember to surround yourself with people that will give you positive momentum so you can make it through to have something amazing to talk about.