The King of Four-Letter Words 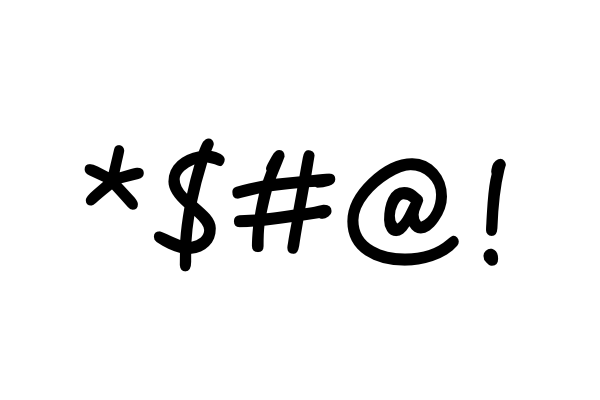 Seriously Strong Language
I find I use some strong language quite often. In fact there’s one particular word that I use way too often. In my opinion, it’s one of the most volatile words in the English language.

This usually happens when I’m thinking back on mistakes I’ve made and people I’ve hurt. Being an introspective guy, I’m in my head a lot. I think about future possibilities, tasks I need to do, and ways to improve my life and the lives of those around me. That’s typically when it happens.

I think of a person or a situation and then I think about something I did that was frustratingly boneheaded and I feel angry – angry with myself for doing something like that. And that’s when it slips out.

The Angry Troll
It’s just a four-letter word, but it’s filled with anger and malice and darkness. It’s ugly and disgusting and sits like a troll in the corner wringing its hands deceptively with a cruel smile on its face.

It’s HATE – anger personified. Its purpose is to reject and disdain whatever it is slung all over. It seems innocuous – “I hate broccoli!” “I hate that movie!” It’s a way of saying something isn’t our cup of tea. Or is it?

It Blocks Us From Recovery
The problem is that hate is non-descriptive. It’s a way of covering something we don’t like in a blanket of dismissal. And it unapologetically does so with complete disregard for any explanation.

When we say we hate, we are not dealing with the real problem. When I look at past actions and pull out the hate card, I am not helping myself in any way. All I do is get angry with myself without understanding what is causing the hate.

If I look back on an interaction with someone that I hurt and I say “I hate myself”, I’m avoiding the truth. “It hurts me to know I hurt someone.” If I look at something I did where I embarrassed myself and I say “I hate that I did that”, I’m avoiding the truth: “I feel embarrassed that I did that, and I worry that people look down on me because of it.”

It’s Different Than Its Opposite
Love does not work that way. Love doesn’t need condition. Love says everything it needs to say. Love is about compassion, concern, connection. Hate is about disguise and hiding and avoiding what’s really deep and dark underneath.

Hate is simply a mask to avoid feeling what we feel. Hate is the king of four-letter words.

I know I need to work on it. It’s a simple plan: When I say I hate something, I’m to ask myself “why? What is it about that thing that I don’t like?” Then I’m going to do some soul searching and find out what I need to do to confront that, accept that, and be okay with it. That’s my plan, and I’ve already put it into practice.

What about you? Is this four-letter word serving you well? Or is it covering up a well of hurt and pain that you might need to deal with? Why not join me in making our words more meaningful and our anger less controlling.