Turning a Bad Habit Around

Sometimes You Can’t Get Traction
Have you ever struggled with a bad habit? No matter how hard you try it seems that you just can’t get rid of it? Or have you ever wanted to create a good habit and you just can’t seem to find the motivation?

Cristi, my girlfriend, was going through the same thing. There were some habits she found it difficult to make headway on. She wanted to get rid of some bad ones, and she also wanted to create some good ones. She tried everything. She couldn’t seem to find enough motivation to keep the momentum going when times got tough.

At the same time she loved games. She’s an avid gamer and loves to score certain types of achievements. In fact, there was a particular game we played where we were both trying to collect digital pets for awhile. She was almost addicted. But that worked in her favor.

Bad or Misguided?
We like to think of certain habits as bad, but maybe they aren’t bad, just misguided. The fact that we mindlessly shovel chips in our mouth while we watch TV can be channeled to mindfully move puzzle pieces around instead. The fact that we go out to catch a smoke with our friends to socialize could be used to catch a quick lap or two around the building while we cheer each other on.

After all, you can’t just remove a bad habit. It leaves a habit vacuum. A habit is an action that is performed based on some trigger. When you remove a habit such as eating chips, you haven’t removed the trigger, such as watching TV. Every time the trigger happens, you will be compelled to act in a habitual way.

If instead of fighting against our habits, we work with them, we can replace the action with a better action when the trigger occurs. When we sit in front of the TV we can pull out a puzzle to work on. When we feel stress and need to socialize, we can take a lap around the building with our friends. That way we use the momentum of the existing habit to propel us forward in a good habit.

Real Life Achievements
And that is what I helped Cristi do. I came up with 36 different achievements in 4 categories. I created special labels that showed the achievements and put those on a knick knack shelf. 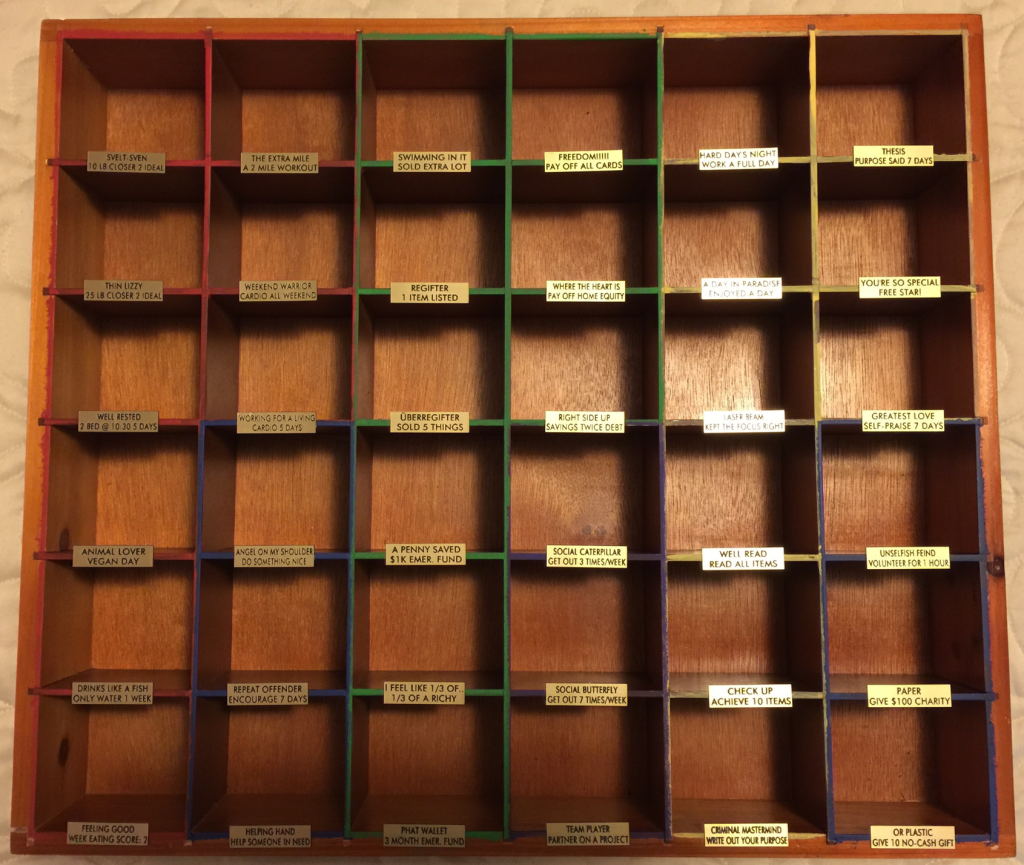 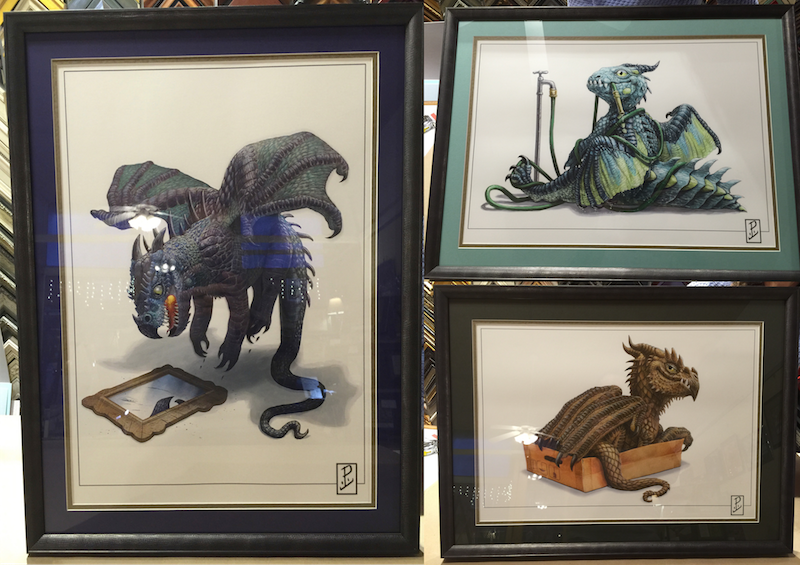 It took a few months (some of the achievements required quite a lot of work), but she did it; she earned every animal and filled out the shelf.

The Secret Sauce
How did she do it? How did she accomplish so much in just a few simple months, things that she had been trying years to do, but couldn’t make happen?

There were several things at play here. First, we employed some “small wins”. There was an item just for existing. There was a second for reading all the achievements. 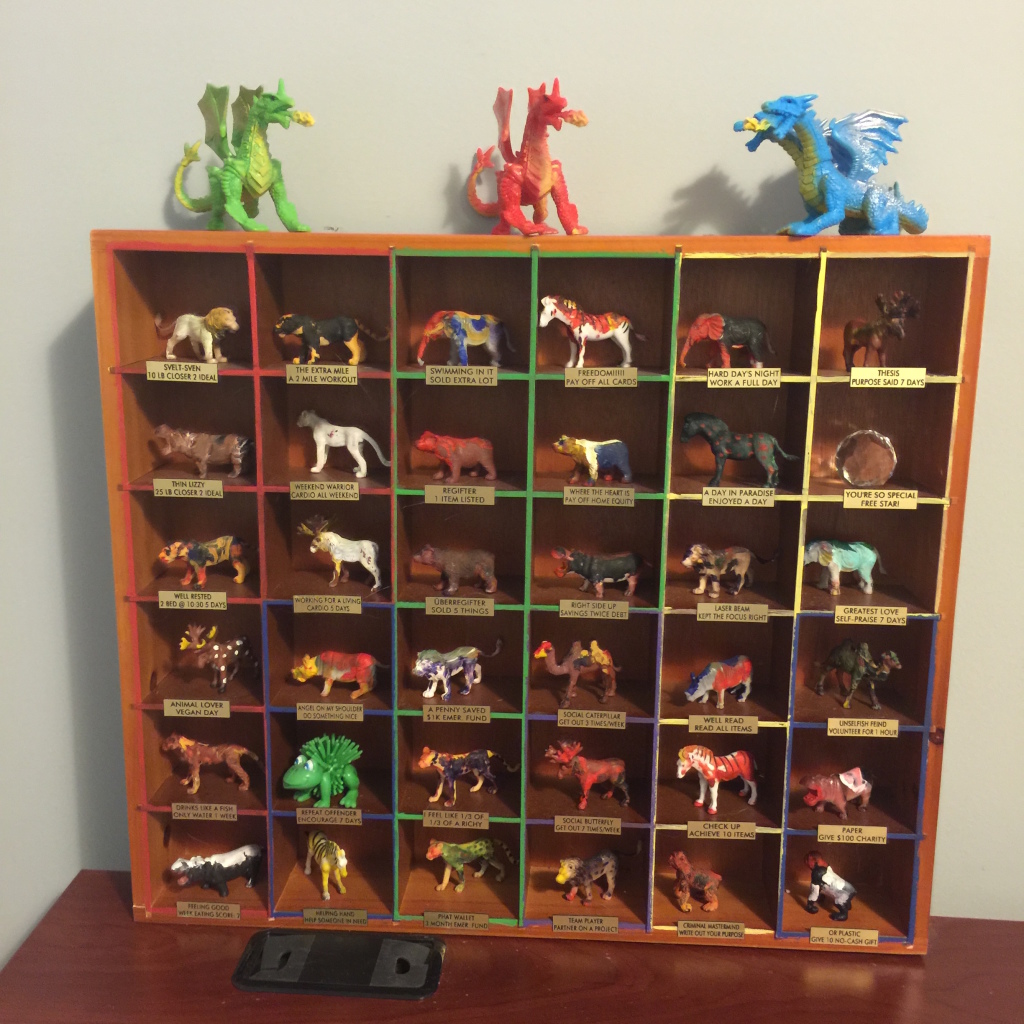 In the end, it was fun. It was a way to connect something she enjoyed (gaming, achievement, collecting) with something she wanted to accomplish. Enjoyment became a major motivator that made her vastly more successful than she had previously been.

Even the prints are more motivation than reward. Now, every time she looks at the prints she can remember how hard she worked, and be motivated to push forward again.

Making the Change
To do this, you simply need to do three things. First, discover your triggers. Find out what it is that causes you to perform a habit that you want to change. Second, find a positive thing to do in place of the habit. Much like doing a puzzle instead of eating chips, or taking a lap around the building instead of smoking, you can find something to change your reaction to a trigger. Finally, reward yourself. Find some way to reinforce the habit. It could be a special meal once you reach a certain goal, or a bunch of plastic animals in a knick-knack shelf. Find something that will motivate you and move you in the right direction.

It doesn’t take much – just a little bit of self-awareness and a small tweak here and there to take on a bad habit. These simple steps are a doorway to improvement. Do these three things, and you can turn a bad habit into a better life.