Why the Nancy, Steve, Jonathan Triangle Is My Favorite Part of Stranger Things 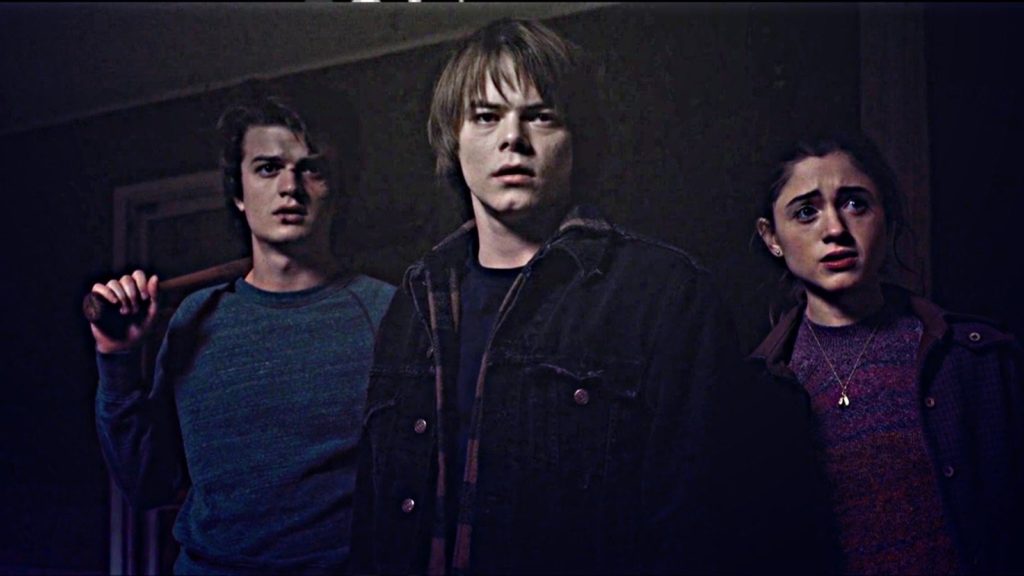 I just finished watching Stranger Things for the third time. I could cite so many amazing things about it, but my favorite thing is definitely the story with Nancy, Steve, and Jonathan.

Spoilers Ahead
This is the part of the post where I’m supposed to tell you that if you haven’t seen the show, watch out, because I’m going to talk about it.

Only, if you haven’t watched the show, what in the world are you doing with your life? There is some guy out there who put off curing cancer by a couple days to watch the show. Go watch it. It’s awesome. From the writing, to the cast, to the effects, to the story itself, this is a beautiful slice of visual storytelling.

My Favorite Part
With all that other stuff that is so magnifique (puts fingertips to lips and kisses them open like a French chef pleased with a meal), it’s the interplay between Nancy, Steve, and Jonathan that I absolutely love.

It’s brilliant. It’s amazing. it’s fantastic. And there are three simple reasons why.

It’s Rounded
From a storytelling perspective this is gold. In a story you have two types of characters: round and flat. A round character has depth. He has layers. He’s complicated. He’s neither a saint nor a sinner. He’s human. He has to deal with hard choices and difficult decisions.

Good characters are round. They have depth. They surprise you. You relate to them. You can see yourself in them. Nancy, Steve, and Jonathan are all round characters.

Good writing has characters that have depth and roundness to them. They pull out the unexpected. They simply make you feel people are more than the sum of their parts.

It’s Redemptive
In this case, that’s redemption. Here Steve is acting in such an awful way. He’s flat. He’s following the formula. He’s doing exactly what he is prescribed to do.

But then, like the character in Aha’s Take on Me video, be bursts out of the story’s confines and choses to be his own man. He’s no longer a slave to the flat designs of a predetermined narrative, but he takes control of who he is and becomes something more.

In doing so, he finds redemption. He finds that he doesn’t have to live by those rules. He can make his own path, and be the person he really wants to be.

It’s Human
Which makes him so human. He’s not just stuck in a simple rat in a cage, pull-a-lever-get-a-pellet existence. Just like us he’s found himself at a crossroads and he’s decided to take a path to move him not where he feels like he’s told to be, but where he feels he belongs.

Also it’s not just Steve by himself. We like to think in the realm of good and bad, friend and enemy, rival and ally, but so often we don’t have to. We think that there has to be a good guy who gets the girl and the bad guy who gets kicked to the curb.

But why can’t the good guy get the girl and the other good guy be their friend? Why can’t we have enough good in this world to go around without someone getting the short end of the stick?

After all, we are all worthwhile. We all have value in this world, whether or not we make bad choices along the way. We all deserve love.

Great Storytelling
So now you know why I love this part of the first season of Stranger Things most of all. Because it shows real depth, redemption, and that we can break the mold and find new and better ways to interact with each other.

It’s a scary world out there. Sometimes it’s nice to remember that it’s best to face it together, with other people who are trying to do the right things. Of all the things we could do, it may not be easier, but it doesn’t have to be stranger.

In searching for an image, I came across this and thought it was cool.